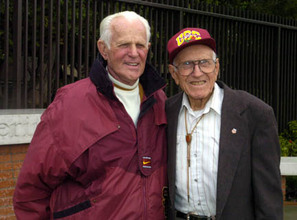 The echoes fade from the locker room walls as the last victory dims into memory.  Long since the hot showers and white towels have been tossed away, you turn the key and ease into the snow covered highway, leaving the locker room for the last time.

For most now, the years have given out to quiet memory, like trophies hanging in a darkened case.  They are opened only to show at cocktail parties and class reunions.  But once a month, or so it seems, you wake again from that dream you have had since the championships when you won the long jump and broke the tape to celebrate victory with your 4 x 1 teammates.  Etched in memory so fine you awake to taste the victory again and again.

You never speak of this, never mention it at cocktail parties or the reunions.  But in your deepest thoughts you feel blessed and filled with a satisfaction you never have to express.  Your team won the title and for the rest of your life, you remain a champion.

If you were lucky, you were blessed to have a mentor, someone who coached you, showed you the way.  In track & field, this someone more than likely enriched your career and as well as your personal life.  The coach, your mentor.

Mentors carve our lives with impressions undimmed and undiminished by the passing of years.  Some mentors have been Olympic coaches, some not so accomplished, but each has often served as both father as well as coach.  Each mentor/coach loved his sport and his predilection.  This love was passed on to us.

We often honor a coach by the listing of names. The names of his athletes, of those who won championship, those who went on to Olympic glory, those who stepped up to fame and fortune.  When we think of a Hall of Fame coach, we may also think of a solitary man, standing in twilights’ shadow, holding a watch at track side - timing the last interval of the day.

And yet, that man, the solitary figure to whom we give honor at track meets and reunions may not have coached any list of champions.  He may not have sent young men and women on to Olympic glory.  He may have worked hard, trained many fine individuals, shown hundreds of young men and women the way through the wilderness.  And yet, the accolades he has received do not compare to those whose fate lead down an Olympic road.

…the solitary figure to whom we give honor at track meets and reunions may not have coached any list of champions.
As the echoes fade from the championship moment, when all the towels have been put away, many an athlete may close the locker room door for the last time but keep the memories of a mentor as well as a performance.   Many of these athletes have memories of a modest performance by any other measure, but yet, a personal milestone, an achievement not diminished by a stopwatch or a place in a national championship.  The man they remember, their coach, is just as deserving to be honored and remembered.

No matter how measured, no matter how small against a list of giants, athletic achievement and personal satisfaction will always haunt the playing fields of memory.  Both in the memories of those returning for a college reunion and for that solitary coach, spending another day in the classroom of life - teaching the fundamentals of individual perfection.  There is more to this pursuit than the chasing of school records, of running, jumping, and throwing.  But for this, if for nothing more, our coaches will always be our heroes.
Reprinted by permission of Track and Field News.